Why is there a Shibuya Dog Statue? 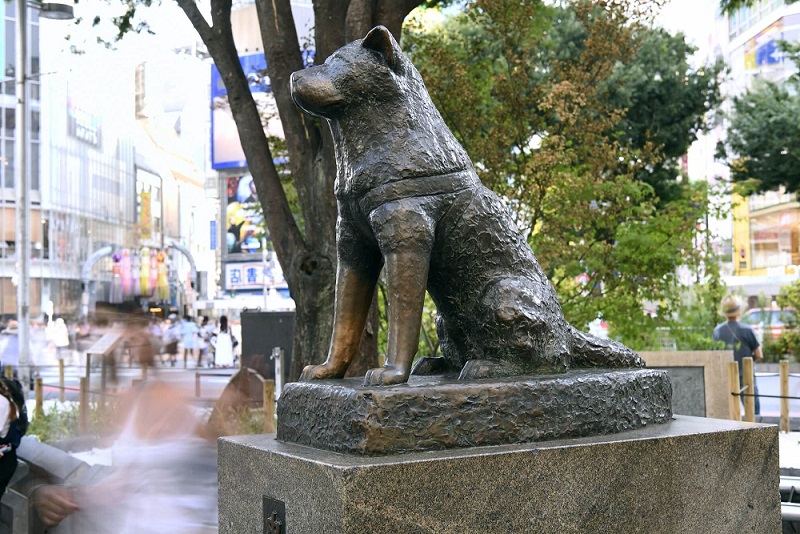 If you have heard there is a dog statue at the station near the famous Shibuya crossing, you may wonder why. The dog it represents was called Hachiko. He is famous for his loyalty to his master, which continued after his death. Here is the story of the dog and the Hachiko memorial statue that was built in his memory.

Loyalty is important to Japanese people. You need to know that in order to understand the importance of Hachiko in the country. This dog, which lived a little less than twelve years (1923 – 1935), is the example for what loyalty should be, to all Japanese countrymen. That is because he stayed true to his master, even after he died. The fact he still represents loyalty to the Japanese people, 90 years later, should help you understand the importance he has taken into Japan’s culture.

Hidesaburō Ueno was a professor at the Tokyo Imperial University. When he adopted Hachiko, he took him to his house in Shibuya (Tokyo). Every day, when Hidesaburō would come back from his work, at the Tokyo Imperial University, he would be welcomed by Hachiko, who would come to greet him at the Shibuya train station. When Hidesaburō died, Hachiko waited for his master to return, through his whole life, coming back to the train station every day, in the hope he would arrive. Hidesaburō Ueno, died when Hachiko was only three years old, which means the dog continued to wait for him, over a period of nine years.

The Shibuya station in Tokyo is known all over the world. Pictures and videos of large crowds crossing the street corner as all lights turn red, is a sight most have seen. When you visit the city, it is a place that you cannot skip; otherwise, you will have missed one of the most important locations of the city. That is where the statue is located. It would be more appropriate to call it the Hachiko shrine, since so many people go there to remember the dog. And although it is small, you won’t be able to miss it.

The bronze statue from artist Teru Ando was erected in April 1934. But the one you will be able to see today, is not the original one, since it was melted as part of the war effort during the Second World War. The one sitting in front of Shibuya Station now, was made by Takeshi Ando (who is the son of Teru Ando). This one was erected in August 1948.

There are other statues of Hochiko all around Japan. There is one in his hometown, in front of Ōdate Station and another in front of the Akita Dog Museum. In 2015, the Faculty of Agriculture of the University of Tokyo celebrated the 80th anniversary of his death by erecting another statue of him, sculpted by Tsutomu Ueda from Nagoya. It shows the dog jumping up to greet his master, has he returned from work.

During the time he remained alive, after the passing of his master, Hachiko started to become more and more popular, as time went by, as he kept coming back to Shibuya’s station to meet with his master. It is then that he started to become an example of loyalty and fidelity to Japanese. Afterwards, many books, movies and other media were written and produced about his life, keeping him alive in Japanese culture, but also around the world. In fact, there is an American movie with Richard Gere called “Hachi – A dog’s Tale,” which was produced in 2009, referring to Hachiko.

It took 76 years for scientists to finally agree on the cause of his death, which took place on March 8, 1935, on a street in Shibuya. The dog, they agreed, had terminal cancer and was also suffering from a filarial infection. The reason why it took so long to settle on a cause, was that they also found four yakitori skewers in Hachiko’s stomach. In the end, the scientists decided it wasn’t what killed him, though.

After his death, Hachiko was skinned and stuffed before being introduced into the National Science Museum of Japan. You can still found this on display, if you want to see him. If you prefer, you can visit his remains, which were cremated before being buried in Aoyama Cemetery, just beside his beloved master Ueno.

The Legacy of Hachiko

The story of Hachiko should make us all try to achieve such a level of loyalty, towards the ones we love. At least, that is the belief in Japan, where parents and teachers retell the story of the dog, for children to learn what fidelity really means.

Every year, on March 8, Japan remembers Hachiko’s devotion, through a solemn ceremony in his memory. It is being held in front of the Shibuya station and hundreds of people show up to honour him and to remember the beautiful story of the loyalty Hachiko felt towards his master.